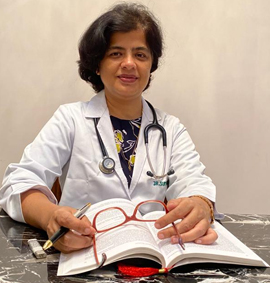 Dr. Sumita Arora MBBS, MD (Obstetrician & Gynaecology) is the leading Gynecologist and Obstetrician of the hospital. She has specialized in Gynecological Laparoscopic Surgery and in High Risk Obstetrics.
One of the 1st surgeon in the city of Lucknow to start Laparoscopic surgery for Gynecological diseases. Dr Sumita Arora has performed more than 1000 difficult surgical procedures laparoscopically. Her goal is to make the surgery more friendly and minimally invasive so that the return of the patient to normal becomes fast and smooth.

Formerly she was HEAD OF THE DEPARTMENT OF OBSTETRICS AND GYNAECOLOGY at Vivekananda Polyclinic and Institute of Medical Sciences, Lucknow. She has established Laparoscopic Surgery in the Gynaecology Department.
Now she is Obstetrician and gynaecologist at Aastha Maternity and Laparoscopy centre and developed it as the super speciality hospital with all latest facilities and equipements to make surgery safe and successful.